The History of The Mount Vernon Heights Congregational Church

The “Heights” section of Mount Vernon, a definitely rural area, was becoming a real estate development by 1890. In 1892 or ’93 a nucleus of residents, of whom George C. Johns was one of the leading spirits, decided that the rapidly growing neighborhood needed religious services. Permission was obtained to use the school house on Garden Avenue for this purpose. Thirteen people attended the first meeting, and from this beginning came a functioning religious society calling itself the Mount Vernon Heights Union Church.

1892: It was entirely a grass roots movement, received no outside coaching, had no denominational affiliation, and its membership was made up of “Roman Catholics, Episcopalians, Baptists, Methodists and Nothings,” as Mr. Johns described it. An evening service for prayer began in the school house on Garden Avenue, the leaders, the majority of whom were Baptists.  The meetings soon took the form of church services, sermons being read.  The same year witnessed the organization of Sunday School.

On Thursday evening, October 7, 1896, a meeting was held in the school house on Garden Avenue for the stated purpose of organizing a Congregational church in Mount Vernon Heights.  Eighteen persons were present. They voted unanimously to carry out this purpose; they received a report from a Provisional Ministry on Membership that twenty one persons “had signified their desire to become members of the church:” They heard and unanimously adopted a report from a Ministry on Creed, Confession of Faith, Constitution, etc., and heard the report of a nominating Ministry for a full roster of church officers. 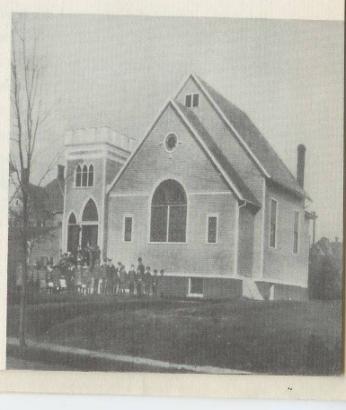